Why are Microfinance Interest Rates so High? 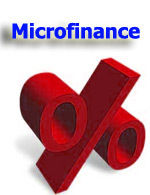 In the few years since Muhammad Yunus won the Nobel Peace prize, microfinance has nearly become a household term. Donating to — and even investing in — microfinance organizations has become a popular year-end tradition for many philanthropically-minded families. But as people become more familiar with the microfinance industry, they ask the inevitable question: Why are the interest rates so high?

Some will argue that the added political and currency risks of lending abroad are what drive up rates to the micro borrower. While these factors certainly play a role, there are many pieces that play a part in the microfinance interest rate puzzle. To get a clearer picture of what’s going on, we should look at all the components that make up these rates.

According to the MIX, the average balance on a microloan across the 1,000 plus organizations that reported information in 2008 was around $600. The average nominal “yield on gross portfolio” was 30.67%. This portfolio yield is a close approximation of the average interest rate that microfinance institutions charge to their borrowers. Now a 30% interest rate may seem high, but how much profit are these institutions really making? To find out, we’ll need to take a closer look at their expenses.

The Cost of Financing

At first blush, 6.65% seems like a low rate given that these institutions are operating in developing countries with considerable political and market risks at play. But many of the people and organizations that finance these institutions are considered to be social investors. Social investors — such as government agencies, non-profits and other NGOs — are willing to accept a lower return on their money in exchange for the social mission that their investment fulfills. Hence, social investors help to lower the cost of borrowing money for microfinance institutions.

Somebody’s Got to Do It

Once microfinance organizations have raised money, they have to lend it out, and to do so successfully can cost a bit of money. According to the MIX, administrative expenses — such as office space, information systems, transportation, etc. — constitute about 6.4% of a microfinance institution’s assets, which translates to 8.12 percentage points of the total rate when making our adjustment from above.

Adding these two costs together we get total operating expenses of around 18.25 percentage points. Yes, administrative and personnel expenses are almost triple that of the borrowing cost. The spread that U.S. banks have to cover their operating expenses is usually only a couple hundred basis points (two percentage points) at most. Does this mean that microfinance institutions are highly inefficient and wasteful?

Well, yes and no. Yes, the business of microfinance by its very nature is inefficient — that’s why banks and other institutions have stayed away. Banks usually make loans in denominations of tens or hundreds of thousands of dollars. As mentioned before, the average microloan is around $600. A microfinance institution would have to make 100 loans to equal a $60,000 bank loan, so a microfinance institution would have to operate 100 times as efficiently in order to match the same cost as a bank for deploying $60,000.

So we would expect it to be more expensive to service microfinance borrowers, but is any of this expense due to waste? Let’s have a look at how microfinance institutions operate. According to the MIX, the average loan officer in the microfinance industry manages 252 loans for 245 different borrowers. The average salary for a loan officer is around three times the gross national income per capita of the country in which they work. When you translate the average gross national income for the sample that the MIX is using, that salary comes to around $6,300.

According to Salary.com, the average salary of a commercial loan officer in the United States is around $65,000. So although microfinance loan officer may be three times as well off as their average countrymen, their salaries are still well behind those of developed nations. 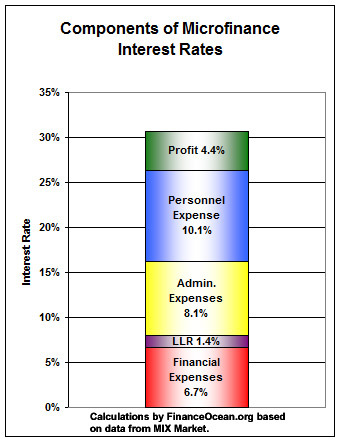 In many ways, such a question is rhetorical. Profit margins of many large banks in the United States are north of 20%, so relatively speaking, microfinance profit margins are much lower.

Bringing it all together, the components of microfinance interest rates are as follows:

These calculations may indeed be back-of-the-envelope, but they are accurate enough to get to the point. The simple answer to the question “Why are microfinance interest rates so high?,” is that “the loans are so small.” Of all the components mentioned above, the ones that stick out as extraordinarily high are administrative and personnel expenses.

But when you consider that the average number of loans outstanding for a microfinance institution is over 8,000 and the average portfolio size is only $3.6 million, you realize that it’s going to take a lot of work to service all those loans. Furthermore, there’s not a lot of money being lent out, so the interest rate has to get higher to cover that cost. It’s as simple as that.

There may be a lot of factors that contribute to the microfinance interest rate, but they become pretty insignificant in the face of operating costs for all those loans. So next time you consider providing money to microfinance organizations, don’t just think about the interest rate to the borrower (which is still better than the alternative). Think about all the work and effort that the microfinance institutions themselves perform in order to achieve that rate.