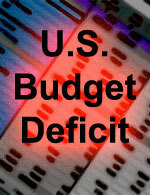 We hear about the problems of U.S. government debt and deficits all the time. In an election year, politicians make claims about how they will work to solve these problems while keeping benefits in place and leaving taxes low. In reality, solving the budget deficit will require painful tradeoffs that are politically unpopular. Let’s roll up our sleeves, crunch some numbers and identify the major tradeoffs.

To get a better sense of how current budget problems are working against each other, let’s take a look at the U.S. government’s income statement.

The government’s revenues come primarily from taxes and social insurance and retirement receipts, while its expenses are made up of the government’s entire budget.

According to the Office of Management and Budget’s (OMB) historical tables for the Budget of the U.S. Government for fiscal year 2011, here are the estimated figures for what the government’s income statement would look like for 2010:


Before we discuss what each of these line items means, we should put the magnitude of these numbers in perspective. According to the Bureau of Economic Analysis — part of the U.S. Department of Commerce — U.S. gross domestic product (GDP) for 2010 is expected to be around $14.5 trillion. This means that the U.S. government budget, at $3.7 trillion, makes up just over 25% of the U.S. economy. 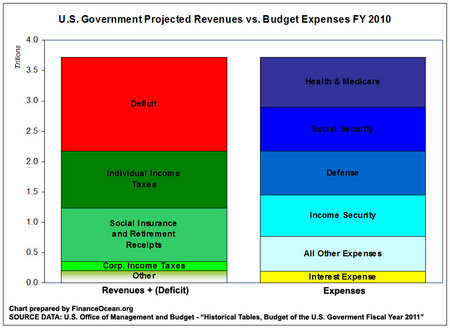 So let’s cut right to the chase. The bottom line is that under current OMB projections, the deficit for fiscal year 2010 will come to about $1.6 trillion. That means the government will have to borrow $1.6 trillion to cover expenses because it does not have enough revenues.

Currently, the total U.S. debt stands at around $11.9 trillion ($4.3 trillion held by federal government accounts and $7.5 trillion held by the public). This means that the 2010 deficit will cause the national debt to grow by 13% in a single year.

We won’t get into which administrations had the largest deficits, however, the OMB’s historical tables for the budget have information on the budget, the deficit and national debt going back for decades for those who want to trace the current problem. The point here is that the deficit is unsustainable, and even if a large deficit is unavoidable during the current recession, significant measures will have to be taken soon to tackle this problem.

Jumping back up to the top of the government’s income statement, we have revenues. The government’s revenues are composed of individual and corporate income taxes, social insurance and retirement receipts (Social Security and Medicare premiums), excise taxes and other receipts.

For fiscal year 2010, all these revenues are projected to amount to $2.2 trillion. This represents approximately 15% of GDP. In other words, if we were to tax the economy as a whole to fund all the government’s revenues for 2010, the effective tax rate would be 15%. The problem here is that these revenues are simply not enough to cover current expenses.

Let’s pretend, for a moment, that all of the government’s current expenses are absolutely necessary and that the deficit must be overcome by increasing revenues. There are essentially two ways this can be achieved: The economy can grow, increasing tax revenues or the tax rate can be increased to generate more revenues.

Increasing the tax rate is politically unpopular — especially if you had to increase it by 66% (10 percentage points), which is what it would take to balance the budget. But the economy would have to grow by 66% in order balance the budget while keeping tax rates where they are.

It is clear that growing our way out of the deficit is simply not possible in the short run, and in the long run, it is likely that expenses will continue to grow making it difficult to ever catch up. A 25% tax rate on the economy as a whole would balance the budget, but such a tax increase may wind up slowing down the economy and reducing revenues the following year.

Cutting into the Budget

Raising government revenues alone cannot solve the deficit, so let’s take a look at expenses. Health and Medicare are the biggest ticket items, racking up $829 billion — 5.7% of GDP. $462 billion of that is Medicare alone.

Next comes Social Security, which amounts to $721 billion — about 5% of GDP. Adding these first two expense items together comes to about $1.5 trillion or roughly the same size as the current deficit. But before we get excited about eliminating these programs to balance the budget, we have to remember that most of the $876 billion in social insurance and retirement receipt revenues are tied to these programs. Cutting them would mean losing the revenues from them as well.

Defense spending is the next big ticket item on the list, weighing in at $719 billion, roughly the same amount as social security. If we cut all three of these programs entirely — health, social security and defense — that would about balance the budget. Of course GDP would also fall by 15% because that’s what these programs amount to. Jobs would be destroyed and tax revenues would fall resulting in another deficit.

Let’s focus on this for a second. Completely eliminating the three largest spending areas of government — over 60% of the total budget — would still not quite guarantee a balanced budget. There are no painless solutions to the deficit. Defense, social security and Medicare are all programs that many Americans care deeply about, and significant cuts to any of them would hurt.

Moving down the expense list, Income Security amounts to nearly $686 billion. Income Security is composed of federal employee pensions, housing assistance, food stamps, unemployment insurance and other programs designed to provide a safety net for Americans during economic downturns. This line item is clearly going to be high during a recession and politically difficult to cut during hard times.

The next category we have on the government’s income statement is All Other Expenses. That’s right: Anything else we haven’t covered falls into this $576 billion bucket. All these programs are barely over one third the size of the deficit. When politicians want to sound tough on government spending, they pick some unpopular program from this bucket and attack it.

There may certainly be a lot of programs in this catch-all category that could be trimmed, but cut them all and you’ve only made a dent in the deficit. Here are just a few of the programs we’d lose if we wiped out this area: veterans’ benefits, transportation, education, international affairs, justice department, energy, science, agriculture, community and economic development, etc.

Finally we come to our last expense item — and perhaps the scariest. Interest expense on the national debt will amount to $187 billion. It may sound like a lot of money, but it’s actually a deal right now. Since our total debt is roughly $11.9 trillion, that would mean that our weighted average interest rate on that debt is around 1.6%.

As recently as 2006, that weighted average rate was around 2.7%. With today’s level of debt that would put interest expense at $317 billion. And every year we have a deficit, that debt continues to grow. With the growth in debt comes increased risk and increased rates on that debt. Interest expense can quickly get out of hand, and the only way to control it is to balance the budget and pay down the debt.

No matter how you slice it, Americans will have to pay their debts — either through higher taxes or lost government services and benefits (or both). Yet, we still haven’t heard any politicians stand up and say they’ll take the heat for giving the country its medicine.

And this analysis of the deficit problem is in many ways overly simplistic, because it only looks at the current snapshot of the problem. In reality, the issues are even more complex given the fact that many government expenses will continue to rise (Medicare and Social Security obligations), and the source of revenues will fluctuate with the state of the economy. But this makes it all the more imperative that politicians tackle this problem now, and that Americans make the hard sacrifices necessary to avoid bankrupting the country.