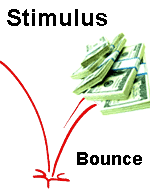 From Bush’s TARP program to Obama’s stimulus bill to Bernanke’s “quantitative easing,” many leaders have attempted to spur the economy following the financial collapse of 2008. The size of each of these measures has been unprecedented and has stoked fears that significant inflation is right around the corner. Yet, the U.S. economy has grown rather slowly and deflation seems to be more of a concern. So the question begs to be asked: Where is the bounce in the economy? Have all these stimuli gotten stuck?

Before we go in search of this stimulus money, let’s map out the money supply so we know where to look. There are four broad measures of the U.S. money supply: M0, M1, M2 and M3. M0 is the narrowest measure and M3 is the broadest measure and is inclusive of all the components of M0, M1 and M2.

M0 is more or less the physical cash or hard currency in circulation. M1 includes physical currency but also demand accounts such as checking accounts and some savings accounts. M2 includes all components of M0 and M1 plus less liquid money such as smaller CD deposits and money market mutual funds held by individuals. M3 includes all components of M0, M1 and M2 plus large CD deposits and those held by institutions.

Here is a simplified summary:

In March 2006, the Board of Governors of the Federal Reserve decided to stop publishing the M3 monetary aggregate because it did not seem to show any additional information about economic activity that was not already communicated in M2.

Since using checks is nearly as easy as cash, the difference between M0 and M1 in terms of liquidity has also waned. Therefore, the biggest distinction in terms of money supply metrics occurs between M1 and M2. M1 is essentially money that is ready to be spent, whereas M2 is money that is parked in low risk savings.

The other places where money can be parked — or invested — would be in stocks, bonds and other more risky assets. Therefore, the level of M2 can often signal the amount of risk or volatility people perceive in the economy. A sudden jump in M2 usually means that people are liquidating more risky assets such as stocks and bonds and storing the proceeds in cash accounts or CDs which are FDIC insured.

M1 alone, on the other hand, is sort of like an individual’s “working capital.” This money represents the amount of money an individual wants to have on hand to cover bills and other monthly expenses. A large M1 balance could indicate that an economy is regularly spending a good bit of money and therefore needs to keep a higher M1 balance. 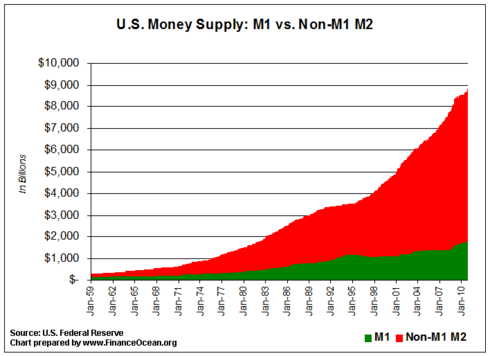 In the past few decades, however, the relationship between the money supply and the performance of the U.S. economy has become weaker.

In fact, in July of 1993, Federal Reserve Chairman Alan Greenspan remarked in Congressional testimony that "The historical relationships between money and income, and between money and the price level have largely broken down, depriving the aggregates of much of their usefulness as guides to policy. At least for the time being, M2 has been downgraded as a reliable indicator of financial conditions in the economy, and no single variable has yet been identified to take its place."

In other words, it has now become very difficult to use money supply measurements — such as M1 and M2 — as indicators for economic growth. Not only that, but the ability to use monetary policy to stimulate growth has also weakened as a result of the breakdown in this relationship.

So what type of indicator can we use to figure out what is happening with stimulus money if the typical measures of the money supply are not strongly correlated to GDP? We could look directly at GDP as a measure, but since this figure is exactly what we’re looking to stimulate in the first place, it doesn’t tell us much about what’s going on behind the scenes and how stimulus money flows into GDP.

One of the factors that has complicated the relationship between GDP and the money supply is the speed with which transactions take place. Because of credit cards, ACH transactions and other technological advancements in money transfers over the past few decades, the same handful of dollars will change hands many more times and buy many more things in a given year. GDP is no longer constrained by the amount of money in circulation but by the amount of money multiplied by how quickly it moves.

The metric we really want to look at is the velocity of money. The velocity of money takes into account both GDP and the money supply. It’s measured simply by dividing GDP by M1. The result is basically how many times a particular dollar gets spent in a single year. 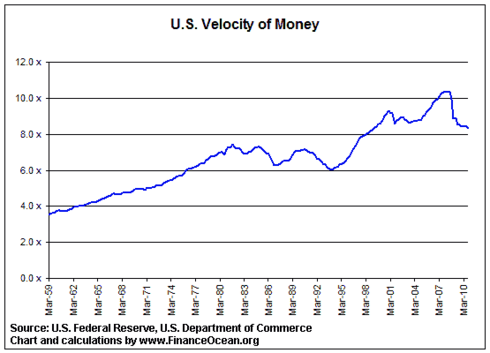 So how did TARP, the 2009 Stimulus Bill and “quantitative easing” impact the velocity of money? TARP essentially gave money to banks to shore up their capital base so they would begin lending again.

In the short run, it increased the supply of money, but not much of that money made it to the M1 level. In the long run, the hope is that banks will begin investing the money and people and businesses will spend — thus, increasing GDP. But banks have been slow to lend.

In the long run, however, the multiplier effect of the stimulus bill was muted because people and businesses were too fearful to either invest or spend as much of the money as they would under normal conditions and much of it got stuck in M1 and M2. M1 grew from $1.57 trillion in March 2009 to $1.76 trillion in September 2010. M2 grew from $8.41 trillion to $8.70 trillion over the same period. And the velocity of money has hovered between 8.4x and 8.5x — relatively unchanged over the same year and a half.

“Quantitative easing” by the Federal Reserve increased the money supply by creating money on its books and using it to buy government securities and other assets. In the short run, quantitative easing increases the money supply, which would slow down the velocity of money, but it also lowers interest rates (purchasing lots of securities lowers their yield and interest rates fall).

Lower rates and money in hand are meant to spur spending and investment in the long run, but the political climate is such that government spending is more likely to get cut. Business and consumer sentiment in the economy has improved, so it is possible that lower rates may spur growth in the private sector, but it is still too early to tell.

The problem with all of these stimulus initiatives is not so much their size, but how they get injected into the economy. Any dollar that enters the economy has to get bounced around more than eight and a half times over the course of a year in order for it to improve the velocity of money. If banks, companies, the government or individuals simply horde that dollar in a savings account, then it doesn’t help much.

Stimulus money needs to be invested or spent on entities or individuals who are likely to spend or invest the money many times over. Any measures that create jobs are prime candidates as the unemployed likely have large backlog of purchases or investments that they have foregone (cars, appliances, etc.). These purchases could spur businesses to grow and hire new employees causing the money to continue to bounce around.

Stimulus money should avoid places where it is likely to get stuck — individuals, companies or other entities who are afraid to spend or invest the money and will hold it as cash. Banks have been a prime example over the last couple years due to all the fear and uncertainty in the financial sector. Although TARP money has calmed bank fears for survival, no amount of additional money will suddenly convince them that the economy is about to turn around and they should start lending.

Should the government or the Federal Reserve decide to undertake other stimulus measures, they have to be very careful about exactly who receives the money. If money doesn’t continue to bounce, the economy will continue to stay stuck.